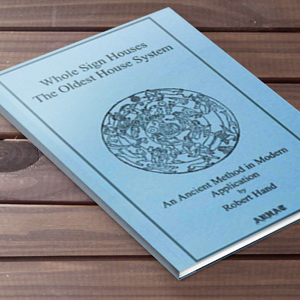 After several years of research into the oldest texts of our astrological tradition we now know what the earliest house system was. And in a way it was not a house system at all as we understand house systems. Rather, it was the signs of the zodiac, themselves, used as a house system. In this system the rising degree of the zodiac marks the sign it is located in as the 1st house. The rising sign itself thus becomes the 1st house, as we would refer to it, from its very beginning to its end, regardless of where in the sign the rising degree may fall. The next sign to rise after the rising sign becomes the 2nd house, the next sign the 3rd house, and so forth. Actually, to understand this properly, one has to know that it is not that the signs were used as houses so much as there were no houses at all, merely the signs of the zodiac used as we would use houses, with no second, separate, twelve-fold division of the chart at all. Whole Sign Houses describes this oldest way of dealing with houses, and shows how effective it can be in modern astrology, so effective in fact that the author (as well as many other students of traditional astrology) has completely given up on modern house systems not just for historical reasons but, even more importantly, because whole sign houses simply work better.

The following is the table of contents.